(An alternative view, courtesy of Wikipedia).

A pipe is a tubular section or hollow cylinder, usually but not necessarily of circular cross-section, used mainly to convey substances which can flow — liquids and gases (fluids), slurries, powders, masses of small solids. It can also be used for structural applications; hollow pipe is far stiffer per unit weight than solid members.

Bars in the Veltins-Arena, a major football ground in Gelsenkirchen, Germany, are interconnected by a 5 km long beer pipeline.
Thor Pipeline Beer (photo by Arseny Chernov) In Randers city in Denmark, the so-called Thor beer pipeline was built. Originally copper pipes ran directly from the brewery and, when in the 90’s the brewery moved out of the city, Thor beer replaced it as a source with a giant tank. 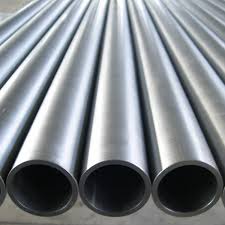